Pickleball is an easy sport to learn, but some of the rules are unique. Keep reading to learn the basics of how to play pickleball.

The 5 basic concepts are:

This post may contain affiliate links. That means if you click and buy, I may receive a small commission (at zero cost to you).

A fault is when a player does something that is considered not legal because it’s breaking a rule.

Common reasons why a fault can be called in pickleball:

A volley means that you hit the ball in the air without letting it bounce.

This is a common term in racquet sports but in Pickleball there is a slight twist to the meaning.

When you are volleying the ball in pickleball, you and all parts of your body must stay out of the non-volley zone (the kitchen).

***As a reminder, the non-volley zone is the area that is 7 feet on both sides of the net and runs the entire width of the net***

The double bounce rule doesn’t refer to not allowing the ball to bounce twice on your side of the net, although, this is not allowed either.

The double bounce rule in pickleball means that once you have served the ball (the serving side), your opponent (the receiving side) must let the ball bounce once on their side of the net before making a return shot.

When the return shot is made over the net to the original serving side, the ball must also bounce once before the shot is returned.

Understanding how serving works in pickleball is extremely important in helping you understand how to score in pickleball.

Here’s an explanation that hopefully makes it simple to understand serving. And I’ve included a helpful video, just below.

For the purpose of explaining how serving and scoring work, we’ll have 2 teams, each with 2 players.

Here’s how it works:

Pickleball Scoring And Why There Are 3 Numbers In the Score

Scoring in pickleball is different than other paddle/racquet sports which causes a lot of confusion, particularly among newer players and recreational players.

I’ve included some examples below that will help clarify how to score in pickleball and explain why there are 3 numbers to call out when announcing the score.

In summary, the 3 numbers represent each player’s score and then the 3rd number represents whether the player who is serving is the 1st or 2nd player to serve in that rally.

Keeping score was one of the most difficult things for me to do when I first started playing pickleball. It just seemed way too hard – learning how to play, the rules and then keeping track of who has what score and who should be serving… anyhow, here are key points that will hopefully help you out.

Keeping score when playing pickleball singles is a bit easier than when playing doubles because there is only one player on each team so there’s no need to worry about who’s serving which makes it much simpler to keep track of the score.

The preferred size is 34 feet by 64 feet long allowing for room to move outside the court’s playing area.

Pickleball is a game that was originally invented by three men in 1965 to keep their kids busy during the summer and it’s now one of the fastest-growing sports in the USA. It’s often thought of as a game for retirees these days, the original intent was for it to be a game for everyone.

When Joel, William and Barney created a game that would be challenging but suitable for everyone to play.

They played with table tennis paddles (ping pong paddles) and a wiffle ball (large perforated plastic ball), and a lowered badminton net, on a badminton court.

This video interview with Barney and his son does a fantastic job of explaining the history and evolution of the pickleball game.

How To Play Pickleball – FAQs

Why is it called pickleball?

According to the USAPA website, pickleball was given its name for either one of the following reasons, or it’s possible that both accounts are accurate:
1. Joel Pritchard’s wife (Joan), started calling the game pickleball because “the combination of different sports“ reminded her of the pickle boat where oarsmen were chosen from the leftovers of other boats.”
2. Barney McCallum says the game was officially named after the Pritchards’ dog Pickles, who would chase the ball and run off with it. According to McCallum, “The Pritchards had a dog named Pickles, and you’re having fun at a party, right? So anyway, what the hell, let’s just call it pickleball.”

What is dinking in pickleball?

The idea behind this shot is to keep your opponent up at the non-volley zone line for the return shot because if they have to return a low ball, it’s extremely difficult if not almost impossible for them to make a hard return or smash it back over the net.

Remember, that the higher you hit a ball, the easier it is for your opponent to smash it back over the net making it difficult for you to return the ball.

What is a pickleball paddle? 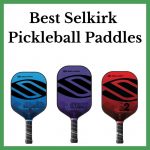 In pickleball, you play with a paddle, not a racquet and they’re made of solid material with a handle. They’re similar to a table tennis paddle but much larger, with most being approximately 15” long and weighing anywhere between 7 – 14 oz with the average somewhere around 8 oz. Here’s a great paddle for beginners. If you want to pay less, this pickleball paddle Amazin’ Aces is a good option that gets fantastic reviews.

Is pickleball easy to learn?

Yes, pickleball is easy to learn. There are a few unique rules but once you understand these, it’s a simple game to learn how to play. However, like most sports, it takes a lot of practice and hard work to get good.

What are the 3 rules of a pickleball serve?

As defined by the USAPA, the 3 rules of a pickleball serve are:
1. The server’s arm must be moving in an upward arc at the time the ball is struck and may be made with either a forehand or backhand motion.
2. The highest point of the paddle head must not be above the highest part of the wrist (where the wrist joint bends) when it strikes the ball.
3. Contact with the ball must not be made above the waist.
4. The serve must be made without bouncing the ball off the court and hitting it.

What do you say when serving in pickleball? 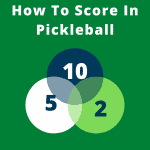 When serving in pickleball, you say the score which includes your score, your opponent’s score and whether you are server 1 or server 2. The score will look/sound like 5-3-2.

What is a fault in pickleball?

A fault in pickleball is when a player does something that is breaking a rule. You can learn more about pickleball rules in my article called Pickleball Rules: 7 Must-Know Pickleball Rules That Will Surprise You or you can read the USAPA Rules book.

How to score in pickleball?

If you want to learn more about scoring in pickleball, read my article called How to Keep Score In Pickleball which explains in an easy-to-understand way, how to keep score, along with some examples to help you better understand.

Articles Related to How To Play Pickleball