Want to Learn Some of The Most Common Pickleball Mistakes And How To Avoid Them?

The objective of this guide is to help pickleball players understand key pickleball strategy tips, as well as understand some of the most common mistakes that are made and how you can avoid them or fix them.

In this article, you will learn:

5 Key Reasons To Get To The Net

15 Common Pickleball Mistakes And How To Fix Them

Playing pickleball doubles can be tricky because unless you and your partner are in-sync, you can easily cross your wires and before you know it, you’ve both just watched the ball go by…

If this happens often enough, you will eventually lose the game.

If you’re playing singles, it’s simpler from a strategy perspective because it’s just you playing your own game.

However, when you’re playing doubles, it’s tricky because if you’re both not on the same page with respect to strategy, a game can go sideways very quickly.

Once you’re done learning about pickleball strategy, have a look at my guide on how to play pickleball because it can give you some additional, helpful information.

The overarching basic strategy for winning in pickleball is to ensure that your team gets to the net while doing your best to keep the other team back from the net.

5 Key Reasons To Get To The Net As Quickly As Possible:

With the basic strategy of staying up at the net (or non-volley zone) in mind, here are:

11 Key Strategies To Learn And Practice:

#1 – SKILLS FOR SERVING THE BALL

Serve the ball into the middle of your opponent’s receiver box. Your goal is to place it in the center and not worry about getting it low to the net or hitting it fast or with spin. Keep it simple.

The objective is to avoid a service fault.

Serving team players need to be behind the baseline by a step or two. 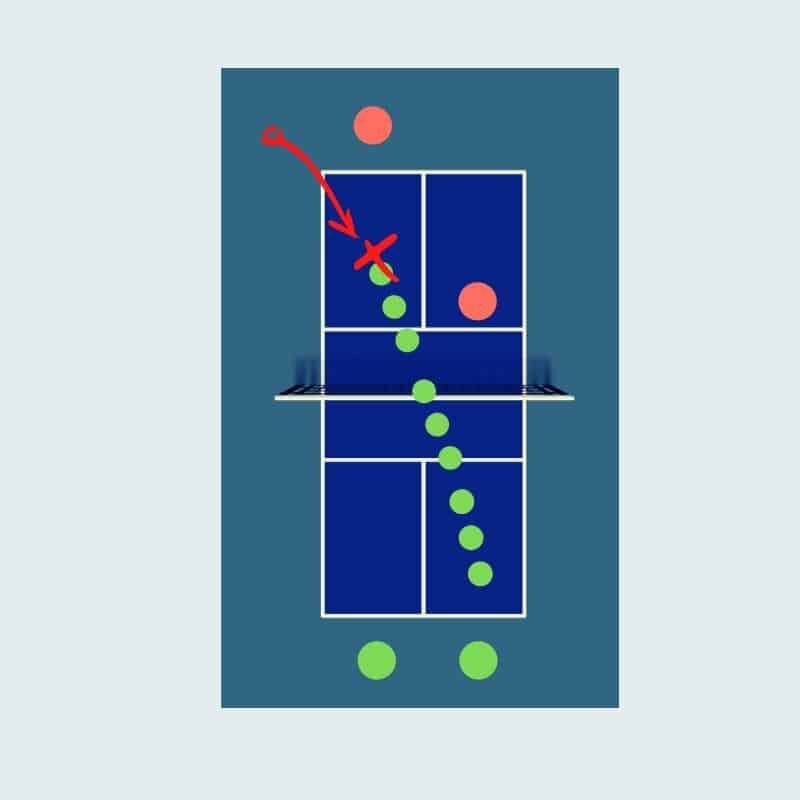 #2 – SKILLS FOR RETURNING THE SERVE

When returning a serve, hit the ball down the middle of the court so it lands just inside the receiver box.

DO THIS FOR 3 REASONS:

(1) It forces a right-handed person to use their backhand

(3) Shots down the middle can confuse your opponents (who should hit it?).

The return serve does not need to be fast or low to the net.

Make your return shot deep enough to keep your opponent away from the net and further back on the court making it more difficult for them to get to the net and take control of the game.

#3 – IMMEDIATELY AFTER RETURNING THE SERVE, MOVE TO THE NON-VOLLEY ZONE LINE, AND KEEP YOUR TOES JUST BEHIND THE LINE BY AN INCH OR 2.

The team who gets to the net first has a huge advantage and is best positioned to control the game.

Remember, that after you return the serve (making the 2nd shot), your team is best positioned to get to the net first and take control of the rally (and try to force the opponent to stay at the back of their court)

#4 – PARTNERS SHOULD POSITION THEMSELVES SO THEY ARE CLOSELY ALIGNED BESIDE EACH OTHER and try to cover the most important 2/3 of the width of the court and move across the court according to where the ball is positioned.

Your opponents will always look to hit the ball between you and your partner. Communicate, call the ball (mine, yours, out of bounds etc.)

Learn the 7 Must Know Pickleball Rules that will help you win more games.

If this is not possible, hit the ball down the centerline. Regardless, move as quickly as you can to the non-volley zone.

Assume your opponent has made a good NVZ drop shot, but doesn’t get to the net right after.

Learn how to dink so the ball lands in the NVZ and you aren’t giving your opponent an opportunity to smash the ball.

The goal is to keep dinking until your opponent makes an error, either missing the ball, hitting it too high giving you a chance to smash the ball or they leave a hole making it easy for you to position the ball SO they miss it.

#8 – WHEN YOUR OPPONENTS ARE AT THE NET,

Remember, it’s always best to hit the ball softly into the NVZ.

Don’t hit a high shot to a player at the net because this gives them the opportunity to smash.

#9 – IF AN OPPONENT IS BACK, KEEP HIM BACK BY CONTINUING TO HIT AT HIS FEET.

If you lob the ball from the baseline, your opponent has time to prepare for a return shot and a better chance to smash. Always stay focused on getting to the net.

#11 – COMMUNICATE WITH YOUR PARTNER

Someone should always call the ball, MINE, YOURS, NO (for going out of bounds).

15 Common Pickleball Strategy Mistakes And How To Fix Them

#1 – Partners leave a hole between them, meaning their opponent can hit the ball down the middle, leaving the partners unsure of who should hit the ball.

#2 – Hitting a high shot to a player at the net because this gives them opportunity to smash.

Practicing your dinking so that your shot is low over the net, preventing a smash.

When returning the ball deeper from your side of the court, practice hitting the ball further into your opponent’s court, well past the non-volley zone.

#3 – Drifting when you serve the ball

This happens when a player serves the ball and moves forward instead of staying behind the baseline.

When you move forward, it makes it hard to effectively swing and return the 2nd shot which is a shot that is typically deep into the court, back to the server.

Practice taking steps back instead of forward immediately after you serve. It’s muscle memory that will help train you to not wander up into the court.

This is almost like dinking for the sake of hitting the ball with no real intention or strategy which means you dink the ball directly to your opponent, making it easy for them to return the shot.

Make your dink shots more purposeful by changing up placement or add spin to the ball if you can. Try to place the ball so that you are forcing your client to have to move in order to return the dink.

#5 – Too easily pushed from the non-volley zone without realizing it, exposing more court, and losing your advantage by being close to the NVZ.

Dink volleying. Rather than letting the ball bounce before you dink, hit the ball before it bounces. And if you do step back from the NVZ, get right back to the line.

#6 – Trying to win from the back – It’s too hard to win points from the back of the court so stay focused on moving to the non-volley zone as quickly as possible and then work on staying there.

Not stopping to properly return the ball will cause you to rush your shot and not correctly execute. It’s a bit like hitting the ball while in the middle of running.

You want to stop and then hit the ball, rather than running/hitting the ball before coming to a complete stop. if you run and rush your shot, you’ll be more likely to miss

#8 – Just watching the ball on the court but not moving

Watching the ball instead of anticipating where it will be going and getting into position.

Stay hyper-focused on the ball, anticipate the direction of the ball and keep moving towards it.

Use whichever swing, forehand or backhand, you are most appropriately positioned for instead of trying to re-position to use your forward.

This means practice both strokes as often as you can so both come naturally and comfortably.

#10 – Playing too close to the sidelines

Hitting the ball too close to the sideline or baseline which could cause you to hit the ball out of bounds when you weren’t anticipating it.

Practice placing the ball more strategically instead of relying on making those ‘close’ shots.

#11 – Dinking with your paddle down

causing you to drive the ball down

Practice not flicking the ball by keeping your wrist stable

#14 – Too much movement in your swing on soft shots (dinks, soft shots, resets

Work on stepping into your shot with a more narrow swing

#15 – Inconsistent contact point with your paddle caused by not being in the correct position when you are swinging for the ball – either you need to stretch for the ball or your arm is very close to your body.

If you would like to learn more advanced strategies, have a look at Joe’ Baker’s Doubles Pickleball Strategy 102

Hopefully you have found this guide helpful and you now have a better idea of the key strategies for playing pickleball.